How Much Solar Energy is Required to Power Alberta?

Ever wondered how much solar energy is required to power Alberta? It's not as much as you might think. 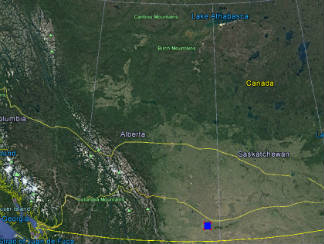 Have you ever wondered just how much solar energy it would take to power our society?  This is something that I have been quite curious on for a couple years so I decided to crunch some numbers.

Alberta has one of the best solar resources in Canada (as measured in kWh/m2).   Solar panels situated in different parts of Alberta will produce different amounts of energy, which shouldn’t come as a surprise since the more sun a location gets, the more solar energy can be produced.  Locations such as Medicine Hat and Lethbridge will produce more energy (measured in kWh) than places like Fort McMurray or Edmonton for the same amount of solar power installed (measured in kW).

Let’s assume the entire array will be built in Southern Alberta, since that region receives the most solar energy.  For simplicity sake, we will use some base multipliers and assumptions for solar energy generation.

According to Natural Resources Canada, Medicine Hat has a PV potential 1,368 kWh/kW.  In other words, for every 1kW of solar power installed, 1,368kWh of energy may be produced under ideal conditions.

Since life rarely provides ideal test conditions, we will assume that the array will produce 1,200 kWh/kW, which will account for system losses.

1MW of solar power mounted at ~45 degrees, with sufficient inter-row spacing to prevent shading will require ~1.725Ha of land area.  With some simple math we get:

115,370Ha of land is required to supply 100% of Alberta’s energy demand from solar panels.

The blue square on the image above is ~115,000Ha.  This area would generate 100% of Alberta’s current electrical energy demand if covered in solar panels tilted at the optimum angle to the sun.

Not that much area, right?

This article is not meant to provide a blueprint for solar energy installations in Alberta, but rather, is a simple outline that generating 100% of our energy demand renewable sources is very attainable. With the reduction in cost of solar panels in Alberta paired with the new residential and commercial solar power rebate, clean energy generation has never been easier or more affordable.