How do solar panels fare in our harsh Canadian winters? Not as bad as you might think. 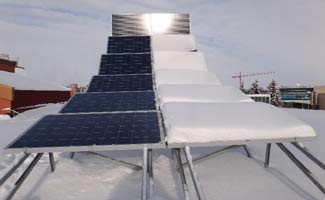 The simple answer is - YES.

Of course, here in Alberta or most places in Canada where it snows regularly, snow will reduce the solar energy output but not by much.

It is important to realize that the day to day production of the solar panels is not as important of a factor for grid-tied solar energy systems as the total annual production. Here in Alberta, electricity production/consumption is metered by the electrical retailer and credited on your bill - this is called Net Billing. This credit may be rolled over from month to month, so if you generate more solar energy than you consume (say, during the summer), then you can draw from that credit during the winter when there is less sunlight.

The primary reason why winter or snow coverage does not detrimentally affect solar panels is because most of the total annual sunlight (solar irradiance) comes in March-October when there is little snow and the days are long.

In addition to the primary reason mentioned above, it is also important to keep in mind that solar panels will melt snow off at a greater pace than surrounding shingles as they operate at temperatures above the ambient temperature and have a much smoother surface.

Even with minor amounts of snow coverage, sunlight can penetrate the snow (within a couple inches) to accelerate the melting process and generate electrons.

NAIT's Alternative Energy program conducted a 3-year study of the effects of snow coverage on solar modules in Edmonton and Grand Prairie.  To test the effects of snow coverage, solar panels were installed at angles of 14, 18, 27, 45, 53, and 90 degrees respectively.  For each angle, one solar panel had the snow removed and one panel was left with the uncleared snow.

The study showed that solar panels which had the snow removed only experienced 1% to 5% more production than their counterparts which were left un-maintained over a 3-year time span.  This result directly shows that snow does not critically effect the production or viability of solar projects in Edmonton, Alberta or Canada for that matter.

It is important to note however that if solar panels are mounted at a shallower pitch or if the winter precipitation levels increase above the levels observed during this study, then production losses due to snow may increase to approximately 10%.  Such production losses are still not considered detrimental and will not critically affect the viability of a solar PV project in Canada.

The bonus to solar panels in the winter is that cold weather actually increases their efficiency.  Solar panel efficiency is significantly higher at -25 degrees Celsius than at +45 degrees Celsius (which is not an uncommon operating temperature in summer).  In select (albeit brief) cases, solar panels actually experience increased production due to reflection off of surrounding snow coverage.

You can read the full report on snow coverage in Canada.

NOTE: Although this was an extensive study, it is important to qualitatively mention that the locations of these arrays were likely subject to above-average wind speeds. Solar panels on homes may see slightly more losses from snow coverage since most homes have trees and other houses to block wind.

If your solar panels are on your roof, we strongly recommend that you DO NOT climb on your roof to clean them off.  It is not worth the safety risk or the hassle for the minor increase in generation.  If you're array is ground-mounted in an easily accessible location and you really want to get out of the house, you can brush them off with a soft brush.  Do not use coarse brooms, wire brushes, or hockey sticks as they may scratch the tempered glass on the solar panel.