Which inverter system is right for me? 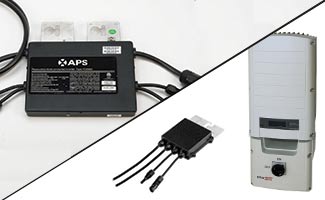 What's the difference between micro inverters, string inverters and DC Optimizers and which one is best for me? Its not as complicated as it may seem.  The answer to those questions depends heavily on your property's architecture, and available space.  Each inverter system has its advantages and disadvantages so lets break them down individually.

First, what is an inverter?  An inverter is what alters the current coming out of the solar panels from DC (direct current) to AC (alternating current) so it can be used readily in residential/commercial properties. There are different types of inverters for different voltages - 240V for most residential solar applications, and 208V, 480V and 600V for commercial applications

Micro inverters should be used when:

String inverters should be used when:

DC Optimizers are an additional component that work with string inverters to eliminate their key disadvantage - if shading occurs on a system with DC Optimizers, the remaining system outputs maximum power, similar to the effect of a micro inverter. Optimizers are mounted on the roof beneath each module, however, a string inverter is still required.

DC Optimizers should be used when:

The best option depends on your exact site. Different jurisdictions have different electrical code interpretations which may make one inverter system more favourable over another. The best system generally comes down to what will be the most cost-effective for your project.

String inverters are the most cost effective, but are only applicable in select circumstances.  Because of string inverters' selectivity, micro inverters and DC optimizer systems are gaining in market share.

Both micro inverters and DC optimizers are fairly comparable in cost.  If there is no room in your home or building for a string inverter, then micro may be more applicable.  Similarly, if you are planning a large installation, DC optimizers' scalability may give them the edge.  Deciding a clear cut winner between optimizers and micro inverts is a difficult task and one that can only be evaluated as the technology develops and inevitable corporate feuds ensue.

Additionally, the cost of various inverters' may be impacted by CE Code rule changes and international trade issues (such as tariffs on one country or technology type).

Part of what we do at Kuby Energy is regularly investigates what inverter systems are the best quality and value for the given social, political and economic conditions. It is in everyone's best interest to make sure you have the best product options at the lowest prices.