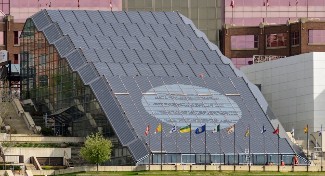 Solar panels aren’t what they used to be. The future of sustainable architecture, BIPV, is here.

The look and performance of BIPV solar glass can be highly customized to each project. Even the colour of glass can be customized, unleashing a whole new set of architectural solar design possibilities.

Benefits of BIPV and Architectural Solar

Building Integrated PV services many problems for buildings. Besides the obvious benefits of solar panels such as clean energy generation, BIPV opens up new areas to install solar electricity from otherwise unused space such as on walls or above canopies. The latest BIPV also provides industry leading UV, infrared,thermal and acoustic properties.

Beyond this, BIPV and architectural solar glass creates unique and beautiful aesthetics for the building.

Both types of architectural solar glass can be used for many different end uses, but each will have their own advantage depending on the solar array location, building needs and desired look.  BIPV solar glass comes in standard shapes, but can be customized if your project requires specific shapes or dimensions.

Crystalline glass looks closer to what most people think of when they picture solar panels, with a few key differences.  Standard solar panels most often have an aluminum frame and solid white or black backsheet. The backsheet creates an opaque product with no light transmission.

Crystalline glass has solar cells aligned in a clear piece of glass.  The size and spacing of the cells within the glass can be customized to allow more light to pass or to increase the solar glass generation potential of the building.

Bifacial modules, solar panels with a clear backsheet that generate electricity from the back side, are a form of crystalline PV and can be used in many solar design applications. Bifacial modules will be referred to as a separate class though as their main purpose is not to integrate architecturally, but rather to generate more electricity from ground reflection onto the rear face of the module.

Crystalline BIPV solar has a higher efficiency than amorphous silicon and should be used if maximizing the solar energy generation is desired. The unique look of crystalline glass also makes is desirable for many design applications.

Amorphous silicon looks like normal glass, except that it generates electricity. The glass can be made darker (more efficient) to generate more electricity or lighter (less efficient) to allow more light to pass through.

The colour of amorphous glass can be fully customized. Yes,you read that correctly – you can get coloured solar glass.

BIPV and solar for architects has many forms.  Below are some of the potential applications for solar architecture design. Each of these innovative solar products for architects can be achieved with crystalline or amorphous solar technology and used for residential or commercial solar glass applications.

Solar cladding and facades are one of the most prevalent forms of BIPV.  Solar panels can be fit into exterior layers of a building or can form the entire envelope. Both applications can use amorphous or crystalline solar.

Solar cladding can use standard solar panels with opaque backsheets if interior light transmission is not required.

Canopies and skylights that generate solar energy are growing in popularity for carports, patios, offices and retail areas.

This is the most prevalent form of solar power systems on commercial buildings.  This is not considered BIPV, but it is still useful to plan solar into a building at the design stage if possible.

Solar panels on roofs are typically ballasted, fixed at a low tilt. Ballasting the system negates the need for any roof penetrations. Although the low tilt produces less energy per panel, it allows for a higher solar power density and more overall energy production from a given roof area.

Panels should be mounted facing due south or aligned with the building outlines. Roof mounted solar can also be facing East-West. E-W mounting follows a similar logic to the low tilt – less energy is created per panel, but can allow for more panels to be placed on the roof potentially generating more solar energy.

Solar can be mounted vertically on walls if there is sufficient space. Once again, this is not considered BIPV unless it forms part of the building envelope. Wall mounted systems are a simple and easy architectural design with solar.

If you want to know more about architectural solar panels or BIPV for your project, please contact us.