Tesla Powerwall in Canada - Cost, Capacity and Information You Need. 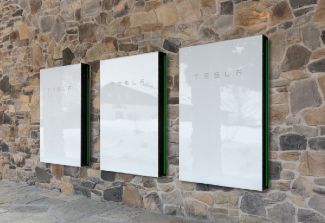 All this with incredible ease of use and simplicity via a smart phone app.

Powerwall 2 is the latest BESS from Tesla and most notable of all home batteries. Several manufacturers produce other battery energy storage systems to varying degrees of competitiveness. Tesla Powerwall packs industry-leading energy and power parameters into a bold, modern casing worthy of public display.

Integration of battery energy storage systems into existing and new buildings has become drastically easier in recent years both financially and electrically. Extreme drops in manufacturing and material pricing make installing Powerwall in Canada more affordable than ever before.

And this is just the beginning of the home energy storage industry in Canada.

Why Install Tesla Powerwall in Your Home?

Batteries combat many concerns homeowners have when installing solar panels in Canada. Although one can install solar panels without Powerwall, and Powerwall without solar, energy storage systems complement solar power systems brilliantly.

With Powerwall, people no longer have to rely on the grid which is commonly powered by carbon-intensive fuels such as coal or natural gas. Powerwall allows solar power systems to generate electricity when the grid goes down and provides homeowners more energy independence and control.

Powerwall’s capacity allows one to use stored solar energy during the day and night with little to no reliance on utility companies and their often dirtier fuel sources.

If a crisis emerges or the grid drops out - are you prepared?

Tesla Powerwall provides backup energy for your home when the grid goes down. As climate change presents more extreme patterns, the risk of being ill-prepared grows.

Residents of California can attest to this after devastating wildfires in recent years disrupted a relatively stable grid.

Time of Use Control

Some jurisdictions charge users more for electricity at certain times of the day, referred to as time-of-use billing or TOU. If your electricity is TOU structured, home battery energy storage systems provide substantial financial advantages.

TOU is only available in certain regions. Alberta, BC, Saskatchewan and NWT for example, generally do not use time of use electricity billing.

Want to keep 50% battery capacity for ‘just in case’ situations?

Want to discharge your entire battery instead of using grid electricity?

A few clicks on the app will customize Powerwall to your liking.

Powerwall has an integrated inverter to allow direct connection to any electrical panelboard. Powerwall can be mounted outside, although it is not recommended for most Canadian climates.  Batteries operate best when kept at or near room temperature.

Powerwall is touch-safe, child and pet friendly with no exposed wires, hot vents or toxic gases. Up to 10 Powerwalls can be mounted together in a system.

Grid-tied applications are the most common integration for Powerwall in Canada.  It is now possible to go fully off-grid (no electrical connection to utility grid) with Powerwall or to provide backup power in commercial applications.

Tesla Powerwall replicates the frequency of the electrical utility grid, called grid-forming.  This feature allows solar panels to continue to operate in the event of a grid outage, contrary to the typical anti-islanding behaviour which turns solar power systems (specifically, the inverter(s)) off in the event of an outage.

Remaining grid-tied is the most economical option if your property has an existing electrical utility connection. This is explored further below.

Grid energy and stored energy interplay with each other seamlessly and automatically.  When the grid goes down, Powerwall senses the disruption and continues to provide energy.

No delays. No manual switching required.

Powerwalls (and solar panels) tie into your main electrical panel and all loads receive energy in the event of a grid outage.

This method requires moving a home’s essential loads into a separate subpanel. In the event of an outage, these critical loads will be supplied by Powerwall and solar energy while the non-essential loads in the main panel remain dormant.

You and your family can weather any storm and still live a comfortable lifestyle with an operating fridge, freezer, internet, boiler, and select switches & outlets.

Through a recent addition, living off-grid with Tesla Powerwall is now possible

If electrical utility connections are too costly to install or simply not desired, off-grid living is now possible without sacrificing lifestyle.

Off-grid installations require a minimum of 2 Powerwalls and an internet connection. It is highly recommended to have an additional generator (diesel, gas, or propane) on site in case there are prolonged dark periods.

This is a breakthrough addition to now allow the safe backup of critical commercial infrastructure such as servers, computer banks and other important hardware.

How Long Will Powerwall Last in an Outage?

How long Powerwall lasts in an outage is referred to as days or hours of autonomy.  The autonomy of a BESS is based on its capacity as well as what loads are being used and for how long.

Tesla has compiled an excellent tool to gauge autonomy based on different load scenarios.

Powerwall will last approximately 1 to 2 days but can be extended to 7+ days by modifying lifestyle choices or by adding additional Powerwalls. Solar panels will charge Powerwall, but it may be wise to consider how long it would last without solar input should the power go out in winter or during extended cloudy periods.

Is it Better to be Grid-Tied or Go Off-Grid with Powerwall?

Whether it is better to be grid tied or live off grid depends on your desire, budget and property.

‘Cutting the chord’ is a common desire for those who want to take energy independence to the next level but this may be cost prohibitive for the average BC, Alberta, Saskatchewan, YT or NWT homeowner.

It might be a long, cold winter without backup energy.

Installing a grid connection can be very expensive and is highly dependent on the property’s proximity to the grid. If the utility connection is far away, living off grid with Tesla Powerwall may be the best decision.  In other instances, it may be best to install the grid connection and a grid-tied solar power and battery system. In such instances, reliance on the grid can easily be diminished with a critical loads backup without the increased costs of an off-grid solar and battery system.

Living off grid will come with more energy independence, less reliance on ever-increasing grid electricity prices and perhaps a little more elbow grease over the years to service and maintain equipment.

Kuby Energy can assist you fully in this decision-making process and provide a detailed financial breakdown.

Cost of Tesla Powerwall in Canada

The cost of Powerwall and associated devices and shipping will fluctuate based on market conditions. Installation of Powerwall will depend on how much electrical work is required to your existing infrastructure.

Tesla Powerwall equipment, hardware, installation and shipping will be cost approximately $18,000 to $25,000. The $/kWh will scale favourably if more Powerwall’s are desired.

When paired with solar panels (and sometimes without), electrical panels often need upgrades to meet the Canadian Electrical Code to install Powerwall.

How much Tesla Powerwall costs depends on many factors.

Contacting Kuby Energy is the best way to gauge how much your solar power system and Tesla Powerwall will cost.  Before investing in Powerwall, consider what is the cost of not having electricity?

This article focuses on Tesla Powerwall as the technical specification relative to the installed cost are the most superior on the market today.

If the cost of Tesla Powerwall is prohibitive but having energy when the grid goes down is desired, there is an alternate backup energy solution.  Installing a generator is an affordable way to comfortably outlast any grid outage without batteries.

When the grid goes down, the backup generator kicks on and feeds your home’s loads.

Solar panels will remain dormant until grid electricity is restored as backup generators cannot grid form. An automatic transfer switch will be installed to separate the grid connection from the home to prevent backfeeding.

Thank you very much for your interest in Tesla Powerwall in Canada.  Kuby Energy installs Tesla Powerwall in Alberta, BC, Saskatchewan, Northwest Territories and Yukon Territory. Grid-tied and off-grid solar power installations are customized to meet your exact budget, home and lifestyle.

Please contact us if you have any questions that we didn’t answer or would like a free solar or Tesla Powerwall installation quote.