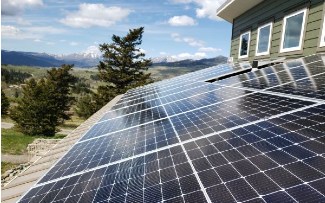 This article details much of what you need to know about installing home solar panels in Kamloops, BC.

Kuby Energy is a solar panel installation contractor with offices in Kamloops, BC and Edmonton, AB.  Our team of local solar installers (electricians) and designers have executed several hundred home solar projects and thousands of kW’s for homes and businesses across western Canada. Included in this portfolio are dozens of projects over 100kW, several building integrated PV (BIPV) projects, and 600+ home solar system installations in BC, Alberta, Saskatchewan and Northwest Territories.

For more detailed information, please see our Guide to Installing Solar Panels in BC or contact us directly for a Free Quote.

Cost of Solar Panels in Kamloops

A main concern most people have is – how much do solar panels cost in Kamloops?

Like everything, it depends.  The cost of solar panels depends mainly on how much electricity (kWh; “kilowatt-hour”) your property uses, and your available roof/installation area.

The average home in BC will use approximately 10,800kWh/yr.  To offset this energy, approximately 9 kW to 11 kW of solar power is required.

The cost of solar panels in Kamloops to offset this average amount of electricity will most likely fall in the $15,000 to $30,000 range before any rebates.

You may be eligible for a rebate or tax incentive to reduce that cost further. There is currently a $5,000 solar rebate available now across Canada. On top of that, solar systems in Kamloops (and throughout BC) are PST exempt!

It is important to note that many homes use more or less than the average amount of electricity so the total cost of solar power in Kamloops may vary beyond the stated range. Similarly, many Kamloops homes may be limited by their available roof area, reducing the number of solar panels that can be installed.

The payback of residential solar power systems in Kamloops is based on your installed cost, how much energy will be produced, and what the cost of offset electricity is from the grid.

The relationship between the first two is the $/W (“dollar per watt”).  This is like $/sq.ft. in other industries – the lower, the better.

As electricity prices creep upwards and the cost of installing solar panels decreases, the payback period of solar in Kamloops will drop.

The above graph is an approximation only for the financial outcomes of Kamloops solar energy systems.  Investing in solar panels is like buying all your electricity up front at a lower bulk price.  It will take several years to break even but is cheaper than buying grid electricity over a 30-year span.

The blue line represents cumulative cost/savings of solar.  It starts at -$20,000 (an approximate capital investment) then gradually trends upwards due to savings on your electricity bill.  If the price of electricity increases, the line will curve upwards and accelerate the payback period of solar in Kamloops.

The orange line trending downwards is the cost for the same amount of electricity purchased monthly.

Where the lines intersect is the relative payback period, the point where your system hasn’t fully paid off its capital investment, but you are at the same point in negative cash had you continued to buy electricity monthly.

This shows that you can expect to break even on your solar investment in roughly 5-8 years and get all your money back in 10 to 15 years.

Is My Kamloops Home Suitable for Solar Panels?

Many homeowners think their home is not a good fit for solar energy because the roof slopes east and west, there are trees nearby, or it is tucked into a northern slope of a mountain or riverside.

While these are each important factors to consider for Kamloops solar systems, they may not be detrimental. It is important to assess each site as a unique case.

East and west slopes will produce approximately 5% to 15% less than a southern exposure (varies depending on the pitch of the roof).  This difference can easily be made up for by adding an extra panel or two. The same goes for trees or other large obstructions.

With that said, there are cases where it doesn’t make sense and we will detail the exact site-specific impacts of your shading concerns.

If you are starting from scratch and building a new home, consider these tips and tricks for optimizing your new build for solar.

Solar power systems in Kamloops may be suitable in any neighbourhood, but some are better than others on average. Keep in mind, there will be many homes in Aberdeen, Sahali or other areas that might be much more suitable than some in the ‘top’ solar neighbourhoods in Kamloops.

Notice the communities that are terrible for solar systems in Kamloops?   Same here.

No complete neighbourhood in Kamloops should automatically be written off.  If you have concerns, but are not 100% sure, please reach out and we can do a free site analysis for you.

How Solar Energy Works in Kamloops

Solar panels are connected to your home's electrical panel. From there, solar energy is fed to your home’s loads wherever it is needed.

If solar energy is insufficient to cover your demand, then energy will be imported from the grid as it usually does.  There is no switch or manual input needed for this to happen, it is all automatic.

If excess solar energy is generated, it will be exported through your meter and you will get a kWh credit from BC Hydro. This process is called Net Metering.

Net Metering is a major advantage for solar in Kamloops (and all of BC). The kWh reduction on your bill will first reduce your higher Step 2 fees and potentially remove all Step 1 fees too.

At the time of writing, the Step 2 fees are over $0.14/kWh and Step 1 fees are just under $0.10/kWh with no sign of decreasing anytime soon.

Net Metering is why most homes do not need batteries.  Excess energy can be sold to BC Hydro for a credit rather than you having to pay to store it.  If you are subject to frequent power outages, then installing a home battery such as a Tesla Powerwall may be a great option for you.  In this case you are still tied to the grid, but are far less reliant on it.

Off-grid solar power installations work slightly differently than grid-tied solar energy systems since there is no grid to act as your battery. Off-grid solar systems need batteries, and often backup generators to store unused energy and provide energy when the sun isn’t shining.

Off-grid solar installs are typically more expensive due to the need for these batteries and a generator.

In many instances it can be more cost effective to bring power in from the nearest location than it is to buy batteries and a generator.

Kuby Energy offers various off-grid and DIY off-grid solar packages which can be customized to your exact property and needs.

However, depending on your site specifications, these effects may be around 10% annually. This study was completed in Edmonton, AB that has a colder climate and longer winters than Kamloops, BC so the effects of snow on solar panels in Kamloops will be even less pronounced.

As mentioned with the shading concerns earlier, this minor difference can be overcome with the addition of a couple solar panels in most instances.

Solar panels have a production warranty of 30 years meaning they are guaranteed to output specific power for the next 3 decades.

Solar inverters come standard with a 12 year warranty, but this can be increased to 25 years if you want further peace of mind.

Kuby Energy provides workmanship warranties of 5 years for home solar systems. This can, once again, be extended in 5-year increments.

Kamloops is one of the sunniest cities in BC with nearly 2,100 hours of sunlight and roughly 1,550 hours of peak sunlight equivalent.

It rivals or surpasses other top ‘sunny’ BC cities such as Victoria, Cranbrook, and Kelowna and is significantly sunnier than international locations such as Paris, Tokyo, and Berlin.

Kuby Renewable Energy is one of the most experienced solar installers across Western Canada. Our team of local solar installers, electricians and designers work out of our Kamloops office to provide small business care with unparalleled experience in the Thompson-Nicola region spanning 4 provinces and territories.

Whether you are wanting to install home solar panels in Kamloops, solar for your business, electric vehicle chargers, or a Tesla Powerwall battery energy storage system, our team of local experts can help you out.

Solar panels generate energy for 30+ years and over this time will pay for themselves and more. Homeowners can expect a financial investment of approximately $15,0000 to $30,000 which may be aided by various solar grants and rebates in BC.

Solar can allow you to live off-grid, or simply rely on the grid less often.

No matter where you are located in Kamloops or the Thompson-Nicola Region, solar panels might be a good fit for your home or business.

Please contact us with specific questions relating to your property.