Wind and Solar Energy Potential in Canada and the World 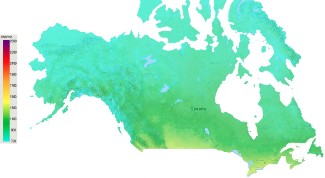 The same old myths continuously creep into headlines, articles and conversations about renewable energy in Canada.

The wind and solar power resources in Canada are incredible.

Saskatchewan and Alberta stick out as the leaders but the renewable energy potential across the nation is too great to be discounted.

Different regions have varying capabilities given the local renewable resource, what is advantageous for one province may not be in other.

Different metrics are used to quantify the potential benefit of renewable energy resources from province to province, most often relating energy and/or power capabilities per base unit.

Solar resource potential in Canada is often provided per base unit such as kWh per square metre (kWh/m2). This value is also referred to as solar irradiance.

Wind energy resource in Canada is typically measured in meters per second (m/s) at a given height off the ground.

Both values are also compared across Canada and the world using the potential or yield metric, given in kWh/kW – that is how much solar energy (kWh) is produced per unit of installed solar power (kW).

Wind farm and solar array location is important - a 1kW solar power system will produce more energy in Egypt than in NWT over a given period. Installing solar panels in the right areas will greatly affect their performance.

But what are the right areas?

The following wind speed and solar irradiance map of Canada detail the renewable energy capabilities across the nation.

The color scheme in the wind and solar resource maps are not a direct correlation between what is a “viable” and “not viable” wind or solar supply.  To determine viability, that is, the ability for a renewable energy system to provide cost effective electricity, the local electricity rates and wind or solar resource development costs must be known.

For example, a residential solar power system in Northwest Territories, Canada will not operate at the same potential (kWh/kW) as a solar array located in southern Alberta.

However, the electricity prices in NWT are substantially higher which more than make up for the difference in reduced sunlight when calculating the ROI for solar panels (financial viability).

The solar resource potential map shown below highlights the solar energy vs power across Canada.

Southern Alberta and Saskatchewan are the sunniest locations in Canada and therefore have the highest solar potential.  Across the prairies and through Ontario and Quebec have excellent solar potential as well.

Even with a relatively smaller solar potential, solar panels in BC are still a viable means of electricity generation and will pay for themselves well within their warrantied lifetime.

It also important to note that the kWh/kW output is not 100% accurate and does not account for all real-life conditions such as tilt/azimuth losses, shading consideration or other site-specific parameters. The relative scale between regions on the solar potential map is an accurate representation of the solar resource across Canada.

The sunniest cities within each province and territory are detailed below. The values in brackets are the solar power potential, measured in kWh/kW.

The sunniest major cities within Canada are detailed below. The metrics beside the name show the solar power potential of major Canadian cities measured in kWh/kW.

Three cities are bolded to show a comparison (below) between other major centres around the world. Regina, St John’s, and Edmonton have been selected as the best, worst and typical major city within Canada to compare against other top solar array locations in the world.

The effects of snow on solar panels are not as bad as you might think. In a city such as Edmonton with moderate sunlight and high snowfall, the average home will only lose approximately 5% to 10% of their annual energy due to snow coverage.

Hail’s effect on solar panels is a similar story and not as much of a risk one might expect. Solar panels are performance tested to withstand Canadian hail storms. Modules can be covered under home insurance to help ease your mind should a rare colossal hail storm sweep through.

The perceived downside to cold weather is that it usually comes when the daily irradiance is lower, but when isolated independently, cold weather is a good thing for solar energy systems.

Wind Energy is the lowest cost new electricity option in Canada without subsidies. A recent renewable electricity procurement round in Alberta produced a record setting rate of $0.037/kWh for wind energy.

Canada is blessed with an incredible wind resource both on-shore and off-shore. The size of Canada is a colossal advantage over smaller nations in that there is far more applicable land and shore area to develop such renewable resources.

Canada’s wind energy development is commendable. As a top 10g lobal leader in wind power production, Canada is on the right track.

Similar to solar resource potential, southern Alberta and Saskatchewan are ideal locations for renewable energy development. Coastlines as well as much of the maritime provinces have incredible wind power potential as well.

How Does Canada Compare?

Wind Power Resource in Canada vs the World

Canada has enough high potential areas for wind energy development to rival all top nations in the world.

A worthy shout out goes to Denmark which produces the highest percentage of their annual electricity from wind energy.

Solar Power Resource in Canada vs the World

They must all be a lot sunnier than Canada, right?  Guess again.

The solar power maps detailing solar irradiance (kWh/m2) for these nations are shown below.

Pakistan and India are not shown, but their solar energy maps are comparable with Australia – bright, red and full of solar potential.

The solar resource map of Canada is shown below with Germany imposed as a direct reference. All maps use the same color scale as detailed in the solar potential map of Canada.

Germany, a nation with approximately 15x as much installed solar capacity as Canada has lower average solar irradiance and a tiny fraction of the available land mass.

Regina, SK is sunnier than Sydney, Australia and Edmonton, Alberta is almost as sunny as Rio de Janeiro

United Kingdom, France, and Japan all tell a similar story.

The solar resources in Canada are better than many of the leading nations and more than sufficient to produce clean, cost effective electricity.

The following list shows the ranking of solar resources of some major cities around the world.  The values show the PV potential of major cities measured in kWh/kW. The bold values coincide with the major Canadian cities’ solar energy resource cited earlier.

It’s interesting to note that Regina, SK is sunnier than Sydney, Australia and Edmonton, Alberta is almost as sunny as Rio de Janeiro, Brazil!

Below is a solar energy map of the world showing the horizontal irradiation (kWh/m2).

Other countries having a better renewable energy potential should not take away from the clean energy capabilities of Canada.

Solar panels may work better in central Africa than Canada, but that is irrelevant – they are still viable here and service Canada’s need for clean energy.